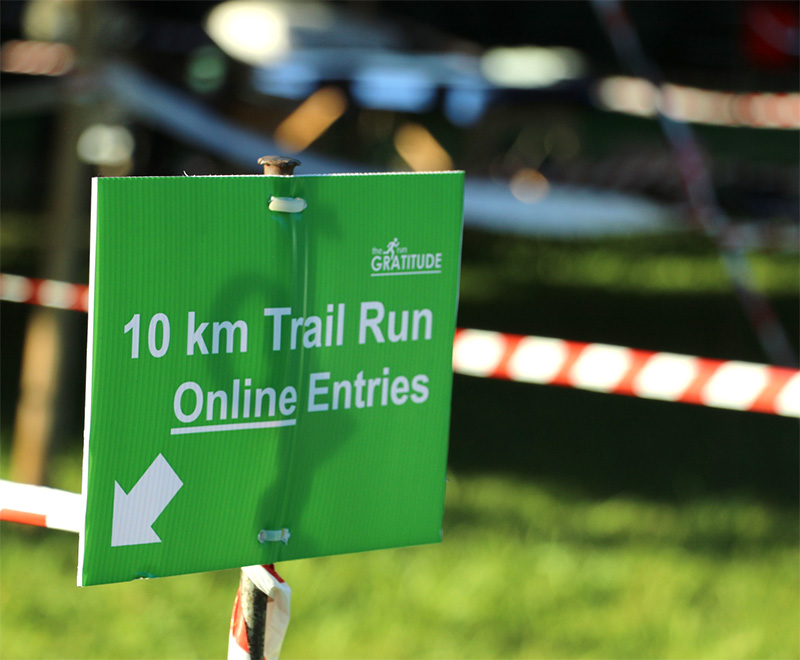 You know, when one puts in months of preparation and long hours and very little sleep in the days before such an event, it is never nice when things (many out of your control) do not go according to plan or when you realise you could have done better in an area or two.

So, yes it was disappointing when we arrived at Lourensford at 05h00 on the morning of the event, to see the mobile toilets strewn over the field, our awesome red start/finish arch destroyed, tent poles not in place anymore and tables broken, all as a result of the strong wind.

We’ve made the best of the cards we’ve been dealt, but I will admit, it was tough to keep smiling. I’m one that wants things to go perfect. So again it was disappointing when I realised we should have done better with the parking arrangements/instructions…

It was probably the cars parked in the beautiful tree-lined road of the 1st km of the 5 km fun run and 10 km trail run route, which obstructed that crucial first red arrow pointing “straight ahead”… instead the trail runners followed the direction of a parking attendant, resulting in a short detour and one of the runners hurting his foot running through a hole in the field that was supposed to be filled with cars…

It was not nice to look into the red and swollen eyes of Estelle, who was stung by a bee like at least 3 others I’ve heard of… Could we have done something to prevent that? Perhaps even more danger tape or a different route?

While I was doing a 5 km lap as a guest runner for team Pragma, a gust of wind picked up some of the wooden table tops on the grass and literally threw them into the tent where many people, including children sat. At least three gazebo’s were either damaged or destroyed. Gazebos belonging to people that gave their time, resources and energy to make a difference..

This morning there were mountain bikers on the trail route we set up, that complaint about the candy tape that was still on the route. James spent 4 hours on the route from 09h00 this morning (Sunday) to clean up each sign and piece of tape. That after he spent more than 7 hours with me and 2 others marking out the route on Friday… probably one of the best marked trail runs ever… and a very long day yesterday at the event.

Let me stop “complaining”.. there is more but I want to go ABOVE the line…

Wow, what an event! We in fact reached the 500 entry mark on Friday while we were on the farm. 16 more fax entries were entered on the online entry system taking our total to 509! I’m sure there were also a good number of “on the day” entrants… in total a very significant increase in entrants compared to the previous (inaugural) event.

No one got seriously hurt on the day. Those flying table tops could have killed someone! Was the start/finish arch still in use, that could have broken loose during that gust and also hurt a number of people and caused severe damage.

Sean, our MC was supposed to be there for around 3 hours.. in the end he was willing to stay there right to beyond the end of the relay run… almost 8 hours in total!

People were laughing, enjoying each other and enjoying nature (despite the wind). Families spent quality time together and built awesome memories.

The people from Lourensford, guys like Casper and Koos were so supportive and accommodating despite all their other responsibilities and stress.

Many people were saying, it was an awesome and very well organised event and that they will see us next year. People offered their help and wants to help us make this better and bigger.

In every situation in life there are two ways of looking at things. We either focus on the not so good, the bad or the things out of our control and we allow that to overwhelm us, or we focus on the “what is right with this”…

In future I will try harder to approach things in the second way. I will not ignore the bad, as one could learn a lot from it, but my focus will be on the good, allowing that to inform my attitude so that I’m in a better position to serve more effectively!

During this same weekend in Hout Bay and Khayelitsha, more than 1400 people lost their homes and three lost their lives because of the wind…


Warning: Invalid argument supplied for foreach() in /srv/users/d4dsacoza/apps/d4dsacoza/public/wp-content/themes/sharelove/single.php on line 36