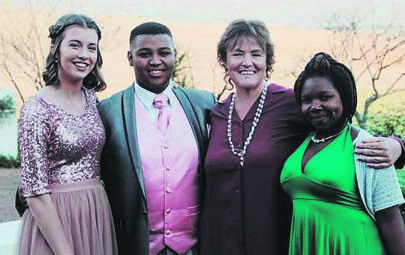 Daniel Frank (second from left) recently completed his schooling career at Paul Roos Gymnasium. With him at his matric farewell, from left, are his dance partner Mia Meyer, foster mother Sylvia Frank and his foster sister Charmaine Zona.

Socio-economic development and education has always been at the top of the agenda for Pragma and Distance For Difference (D4D).

One of the organisation’s core aims is to invest in the well being of people in their areas of operation,” said Stéphan Pieterse, D4D founder and chief people officer at Pragma. “Our core focus is education because we want to assist people to become self-sufficient. At the heart of the matter, though, is that as a company we’ve been very blessed and want to pay it forward.”

Daniel Frank is one of D4D’s bursary recipients. He has been in the care his foster mother, Sylvia Frank, at Sylvia’s House since he was just two days old, after being found abandoned in the street. Sylvia’s House is a foster home and registered NPO in Gordon’s Bay.

D4D was founded in 2005, in response to the images of total devastation and people in need after the Indian Ocean Tsunami in 2004. Over the last 12 years, the NPO has made a significant contribution towards the well being of children. Said Pieterse: “We use sport to generate funds for distribution to various organisations involved in caring for children and to date have raised and distributed close to R6 million. D4D supports two foster homes – Sylvia’s House and Tzadokah – financially. In doing so, we have assisted in providing good education for more than twelve children.”

Daniel recently completed his final examination. “The world is a scary place and stepping into the unfamiliar is daunting. Daniel struggled a bit this year in more than one area of his life,” Pieterse explained.

“The pressure to perform and not disappoint those who have invested time and resources in him, was huge. Many individuals and organisations, such as the Spirit Foundation and, especially, Tessa Smit, have been trying to support him. We’ll all continue to do so.”

At this stage Daniel is unsure of his future. “Sylvia felt it would be best for him to start working or do an internship, where he can learn to be more responsible and give his future some thought before making any hasty decisions,” Pieterse explained. “During the December holidays, he will be working at a lodge in Mozambique. She will also welcome any other opportunities.

Daniel excels at chess and was a Western Province player. He also won several awards. “Chess is still very much a part of his life,” Pieterse points out. “At one stage he even thought of becoming a chess teacher, but then realised the pay is not all that good. Together with Sylvia, Daniel will give his involvement in chess some thought and then decide his further involvement in this area.”

Pieterse believes that by supporting Daniel financially, they have given him the opportunity to get an excellent education.

“Daniel is the first scholar that Pragma supported so closely,” said Pieterse. “We wish him only the best and will support him as much as we can. We’ve learnt a lot and will apply it with more scholars in the future.”


Warning: Invalid argument supplied for foreach() in /srv/users/d4dsacoza/apps/d4dsacoza/public/wp-content/themes/sharelove/single.php on line 36